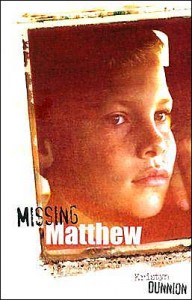 Matthew Stein is a recent arrival in a small town. Nobody really cares where he came from or even that he’s showed up, except maybe Winifred (Freddie) Zoron, who’s in Matthew’s class and who also happens to belong to the Rebel Rescue Squad. When Matthew doesn’t make it home after school one day, the evening news reports that he’s been kidnapped. What could have happened? Where could he have gone?

It takes the initiative of the Rebel Rescue Squad to really get the search underway. Weasel, the squad’s fearless leader as well as Freddie’s best friend, soon discovers that most of the assumptions about the boy’s disappearance are wrong. The rescuers have to deal with a far more challenging mystery than expected—a mystery that lies at the center of the adult relationships in the town.

Missing Matthew is by turns hilarious, thoughtful, poignant and ultimately wise about the ways in which kids relate to one another and to the adults in their lives.

Reviews
“Kristyn Dunnion has created a world that is truly kid-centred. Replete with all the whimsy, confusion, kindness and cruelty childhood entails, this novel is particularly notable for its wonderful depiction of the world of play…a story with heart, verve and momentum, told with humour and sparkle.”  — Books in Canada

“Poignant, wry, and sensitive, Dunnion’s novel is an engaging read as well as an insightful exploration of the nature of friends, family, life, and  death. Freddie is a wonderful character – dimensional and keenly observant - whose intimate, first-person narrative effectively blends humor and heart, and Dunnion’s dialogue, characters, scenarios, and youthful perspectives ring true…Like Freddie, children will discover that there are many sides to every person and every story, and that life is a process that is filled with unexpected challenges and joys.”  — Booklist

“The Rebel Rescue Squad is cute as nails and tough as toffee. They are Carp Head Creek pirates and haunted root-cellar bogy-busters. Sleuths with childish savvy; there isn’t a case they couldn’t crack after dinner and the candy store! Missing Matthew is Kristyn Dunnion’s first book. It is a poignant tragedy of loss, a comedy of the every day, and a rollicking fun mystery for pre-teen rebels and ex-pre-teen rebels alike.”  — Off the Shelf