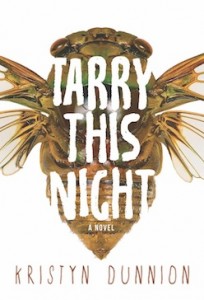 A powerful dystopian novel set during a new American civil war, about a polygamist cult leader and his followers.

In this eerily relevant, cautionary novel, a civil war is brewing in America. Below ground, a cult led by the deluded and narcissistic Father Ernst is ensconced in an underground bunker, waiting out the conflict. When the “Family” runs out of food, Ruth, coming of age and terrified of serving as Ernst’s next wife, must choose between obeying her faith and fighting for survival. Cousin Paul, sent topside to scavenge for food, may return with proof that it is safe for the Family to ascend again. But is it enough to invest all hope in Paul’s unlikely return?

In this unsettling modern take on the Lilith tale, spirited women resist their violent, racist culture and, in so doing, become outlaws. Family members navigate a secretive and deadly arena where faith eschews autonomy and righteousness precludes mercy. With an unwavering eye, Tarry This Night dares to imagine the unthinkable that is present-day America, offering a place for resistance and hope for a new and better world.

“A gut punch of a book, and scarily relevant.”
– JL Jamieson for PopCulture Beast

“Tarry This Night imagines a world destroyed on both national and intimate scales…Yet in depicting the last days of the crumbling Family, the novel also reveals the potential for resistance, rebellion, and change. By showing the fragility of oppressive regimes and dystopian universes, Tarry This Night makes room for hope, even within the confines of its tense, psychological drama.”
– Lambda Literary

“Ultimately a beautiful tale of female resistance.”
– Ophelie Zalcmanis-Lai for THIS Magazine

“Dunnion has a haunting use of language that is almost lyrical, often leaving readers stunned at certain points when they realize the gravity of the horrors she’s weaving into the plot.”
– Ophelie Zalcmanis-Lai for THIS Magazine

“Is it worse to be trapped in stone, or exiled to the open air? Is a stifling religion worse than the rudderless world outside? Kristyn Dunnion pries the lid off this hermetically-sealed community to look at life and death, within and without. Scary, convincing, entirely engrossing.”
– Marina Endicott, award winning author of Good To A Fault, The Little Shadows, and Close to Hugh

“In a time when real life can feel like a dystopia, Tarry This Night reveals the fatherly face of bullying and repression. Kristyn Dunnion writes horror like no other author. She exposes the women who do the brutal work of supporting the system, then gives those same women a chance to enact change.”
―Emily Pohl-Weary, award-winning author of Ghost Sick and Not Your Ordinary Wolf Girl

“Beautifully written, both devastating and yet full of hope, Kristyn Dunnion’s new novel, Tarry This Night is a lyrical tour de force, marrying horrifying family and religious dynamics within a post-apocalyptic landscape. Un-put-down-able, and richly deserving of all the prizes that will no doubt come its way.”
—Sandra Kasturi, author of Come Late to the Love of Birds and The Animal Bridegroom

“Kristyn Dunnion is an utterly glorious writer. The gothic lyricism of Tarry This Night not only secures her a place among the rising stars of genre-bridging literary fiction, it is a declarative staking-out of narrative territory that is uniquely hers. A superb, elegant read.”
—Michael Rowe, Shirley Jackson Award-nominated author of Wild Fell and Enter, Night