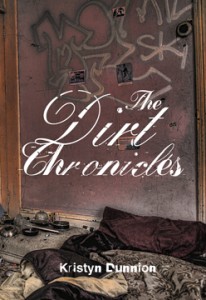 Queer hustlers, anarcho-punks, rural burnouts, and teen runaways feature prominently in the intense reality of The Dirt Chronicles, Kristyn Dunnion’s stunning debut story collection. In these linked tales, urban outlaws in Toronto map out their plans to take over the world while living collectively in an abandoned chair factory, destined for demolition according to a real estate gentrification plan. Their community is infiltrated by the King, a dirty cop bent on obliterating the city’s defiant underclass and exterminating the group’s rogue members; in order to survive, they may have to betray what they value most: autonomy, friendship, and newly discovered concepts of freedom. Audacious and loud, The Dirt Chronicles is a thrashing three-chord rejection of mainstream culture and the powers- that-be, and a combustible homage to class rebellion.

MAXIMUM ROCKNROLL ‘This novel by Toronto’s Kristyn Dunnion is gritty, sexy and brutal’

THIS Magazine In The Dirt Chronicles, Kristyn Dunnion cooks up a dozen sad, pretty, lonely stories and shoots them into whatever unused vein she can find on her audience. It’s a surprising read from an LGBT underclass perspective that starts with coming-of-age stories, wades into the most convoluted of gender politics, and builds into a crescendo of violence and revenge. […]

GLBT Roundtable on the American Library Association Dunnion’s elegant book is more postmodern novel than the short stories that it is billed as—intense, thick realities where real characters live out sad and exhilarating lives. They range from undocumented immigrants to queer teens in the criminal justice system, gutter punks to crime bosses, and yet exist inside a carefully structured fictional whole that puts outsiders in and shows readers around subcultures in Toronto–gritty squats and lofts, desperate tenements, and lonely roads. […]

XTRA Magazine Toronto PRINT: Life on Toronto’s dirty streets By Jorge Antonio Vallejos Mon, Sep 26, 2011 The book is a similar collection of odds and ends, short stories all linked to each other in some way. It is also a glimpse into the gritty lives of Toronto’s queer punk street kids. […]

Known for her visceral, no-holds-barred young adult and speculative fiction, Dunnion’s first literary fiction book for adults is just as fierce and fascinating. These fast-moving linked stories take us deep into the lives of urban outlaws and lovable misfits. — Fashion Magazine

Briarpatch Magazine Tales of heartbreak, fury and hope Book review By Yutaka Dirks Apr 2, 2012 Toronto-based author Kristyn Dunnion dubs herself a “Lady Punk Warrior.” Reading The Dirt Chronicles, her most recent book, one easily grasps the aptness of the moniker. Dunnion’s sympathies are with those living on the jagged edge; outcasts whose hearts burn with love and rage. […]

Kristyn Dunnion creates a voice that is more of a howl: loud, assured, unapologetically intense, and utterly her own. — Quill and Quire  The Dirt Chronicles is tough and tenderhearted, a beautifully-written literary ode to outlaw culture. Kristyn Dunnion’s writing is fierce and funny, a truly original book of stories I hope everyone will read. — Zoe Whittall, author of Holding Still For As Long As Possible